On the 11th of March, after doing a distribution, it was agreed we would go and eat at one of the restaurants near the demolition, as this would probably be the last opportunity to eat there. On our way, we saw a plume of smoke coming from one of the shelters about 150 metres away from the road. The demolition team was working, whilst the police stood around overseeing the proceedings.

People’s attention started to turn towards the fire and the demolition team retreated. It was obvious the fire was spreading to adjacent buildings and was gradually moving towards the remaining section of Afghan square and the shops. 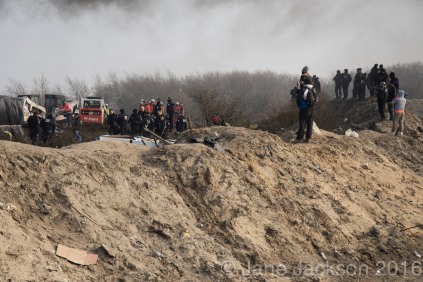 People started to move things out of the cafes; large gas canisters were put onto a flat bed truck that had previously been used to move shelters. People started running with thermos flasks, pots and pans etc. as the fire was increasing in intensity.

I had sneaked round the back of the cafes on the other side of the road and was taking photographs of the police as they started to regroup, when there was a sudden loud explosion. There must have been gas cylinders in the path of the fire as black smoke belched through a shop and into the road. Everyone turned to run, the man in front of me fell over a caravan tow bar and I almost ended up falling onto him. 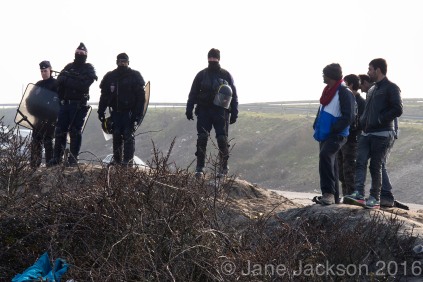 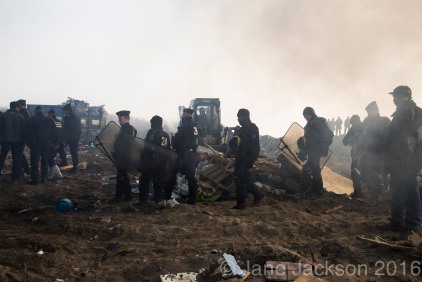 People were running and spilled out of the north entrance of the camp onto the no man’s land. The police corralled everyone from the shops towards safety, yet some of the shopkeepers were trying to return to salvage as much of their stock as possible. Others were grabbing fire extinguishers, though these were useless as the fire was now completely out of control and had engulfed the shops on the other side of the road.

A car near the entrance was somehow opened and a group pushed it away to avoid it being engulfed. People were still remonstrating with the police to be allowed back to retrieve their goods, when the cry of “Gas! Gas!” went round the crowd. The police were loading tear gas. I implored those with me to follow, so that we wouldn’t potentially be trapped with nowhere to hide in no man’s land and be tear gassed. We made it back to my car parked just outside the camp just as the fire engine was entering.

The whole incident had lasted only twenty minutes, but it was a scene of utter devastation.